What is Locky Ransomware?Another ransomware seems to spreading like wildfire, taking a hold of computer systems all over the globe, this time its being called Locky. The Computer Emergency and response team (CERT) under Government of India has raised an advisory on the spread of Locky Ransomware via spam emails. CERT-In published Alert regarding the spam campaign spreading Locky ransomware - http://indianexpress.com/article/technology/cert-in-issues-alert-on-locky-ransomware-4825902/Locky is a ransomware that scramble the contents of a computer or server associated network shares, both mapped and unmapped and removable media and demands payment to unlock it usually by anonymous decentralized virtual currency BITCOINS. Locky is very similar to WannaCry in the way it caused massive uproar around the world. It came into picture in early 2016 and two days ago it was reported that a new wave of spam mails have started circulating again with common to spread variants of Locky ransomware, this time penetrating Indian systems as well. Latest reports indicate that over 23 million messages have been sent in this campaign. Locky Ransomware strikes your system when you least expect it. It locks your computer system and only unlocks it when a ransom demand is paid. Locky uses AES (Advanced Encryption Standard) algorithm to encrypt your system and this is only possible once you download the malicious attachment and Enable the Macros settings. How does it propagate? The primary mode of spreading of Locky is via spam emails. The email contains common subjects like documents, please print, photo, images, pictures and scans which may change depending on the target audience. Once you open this email, and click on the attachment variants of the ransomware automatically get downloaded to your computer. As soon as the variants are downloaded, your desktop background is changed with instructions to be followed and shows a .htm file named Lukitus. Once the system is infected by Locky, all files are encrypted and string with random numbers with extension lukitus or diablo6 is appended to the encrypted files. The instructions contain installation of TOR browser Onion Router Network and visiting onion sites. The users are then demanded to pay 0.5 Bitcoins to avail this decryption service. Furthermore, it has been reported that a spam campaign showing links to fake dropbox sites is being used to spread Locky variants. If the pages are viewed in Chrome or Firefox, they show a fake notification stating you dont have the HoeflerText font. These fake notifications had an update button that returns a malicious JavaScript .js file. In a nutshell, what it does is this: You receive an email, with an attachment that when opened is a scrambled mess of words.At the top are the words, ‘Enable Macros if the data encoding is incorrect.The moment you enable macros, instead of correcting the document, your system gets encrypted and Locky ransomware is activated and Windows ability to take live backup called Shadow copies is also compromised.Your wallpaper changes to How to decrypt message displaying image. 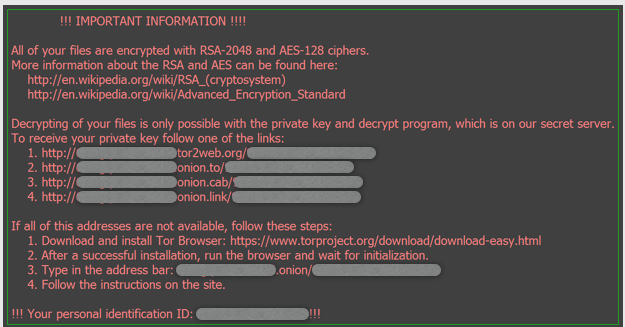 Recommendations against Locky Here is a list of recommendations advised to the users to prevent Locky from compromising your computer. The foremost recommendation to users is to not to open any spam emails, or attachments as well as update anti-spam and block lists.Block malicious IP addresses.Do not download or open attachments which contains Zip files.Perform regular backup of your data, and store it on some other devices most preferably offline.Disable Macro in Microsoft Office applications Disable all macros with notification. Macros can run in Ms. Office applications only if the Macro settings are set to Enable all macros or if the user manually enables it.This is done so because the email attachment comes in Macro Enabled form.Have an updated Antivirus installed on your personal as well as office systems.Dont click on unnecessary popups while visiting websites which may contain Embedded JavaScript .js file which can download the ransomware.Don’t use administrative accounts for carrying out Business as Usual activities, which limits the rate of installation. Also disable remote Desktop Connections.Dont visit malicious websites or blocked websites listed on the advisory at least.Update your operating systems, third party applications like browser, browser plugins and anti-virus software for latest security patches.Practice all the above recommended. In spite of this, if you suspect your computer system has been infected, contact your IT team and under no circumstances pay any ransom.

For dedicated server owners.Each IP you order is class 4 Failover and are switchable between your...

You have created sites with an international focus and are keen to work on SEO for your target...

Keyword cannibalization means that you have various blog posts or articles on your site that can...

VI is a Linux text editor that can edit most of the files under a Linux architecture (text files,...

This manual is to be used to make all administrators more sensitive regarding few topics related...